Fannie Mae and Freddie Mac have given lenders new questionnaires in response to the Champlain Towers South collapse in Surfside FL that killed ninety-eight people last June.  The companies that buy mortgages and package them for investors will no longer purchase mortgages for condos with significant deferred maintenance or safety issues.  Many condominium boards do not have the expertise to answer questions related to the structural integrity of their buildings.  As a result, the condo boards are not filling out the questionnaires for loan companies.  Bank of Hawaii announced on February 22nd that they will consider all loans on condominiums with five or more units as portfolio loans.  Portfolio loans carry a slightly higher interest rate because Bank of Hawaii keeps the mortgages on their books and assumes the full credit risk of the borrower for the duration of the mortgage.

Here is a link to the UHERO’s forecast:

UHERO FORECAST FOR THE STATE OF HAWAII

Governor David Ige, announced on March 1st that the Safe Travels Hawaii program will end on March 25th when the current version of his emergency proclamations expires.  Ige made the decision because there will be no more federal funds available for activities related to combating COVID-19 and not because the Omicron related infections surge showed the ineffectiveness of the Safe Travels Hawaii program.  Travelers and returning residents will no longer need to stand in line for hours to show their vaccination cards at the airport.  On March 8th, the governor announced he will also drop the indoor mask mandate when the current emergency proclamation ends.  Mayor Rick Blangiardi allowed Oahu’s social distancing restrictions to lapse on March 5th.  Customers no longer must show proof of vaccination to dine at restaurants or work out at a gym.  Maui and the Big Island lifted all restrictions on March 1st and Kauai lifted them on March 2nd. Here are two official videos from Governor Ige:

The Red Hill housing water crisis appears to be turning the corner as state health officials announced that residents in Red Hill Housing could resume drinking and cooking with tap water on February 14, 2022.  It is the first of nineteen zones the state declared safe after jet fuel from the Navy’s Red Hill fuel facility contaminated the Red Hill water shaft and sickened multiple residents.  Residents in the neighborhood, Pearl City Peninsula, could resume drinking and cooking with tap water on February 23rd, the health department declared three other neighborhoods’ taps safe on March 1st, and three additional neighborhoods taps safe on March 2nd. The state Department of Health continued to warn the remainder of residents receiving water from the Red Hill water shaft to avoid tap water until state testing shows flushing has removed contaminants from neighborhood water systems.  President Biden signed a bill into law on February 18th, designating $100 million in funding to drain the tanks in accordance with the state Department of Health’s order.  Faced with the task of draining the tanks resulted in the next shoe to drop.  Navy documents, or more descriptively, the lack of documents raise concerns of deferred maintenance on the fuel facilities pipeline to the Pearl Harbor fueling piers.  A 2016 assessment identified 350 required repairs to address corrosion and dents with 230 of those categorized as “urgent.”  The Navy only budgeted money for twenty-three of the repairs and the Navy did not complete an additional twenty-six until 2018.  The documents suggest that defense officials papered over the problem by shifting to more lenient criteria.  As more groups and officials call for draining and shutting down the facility, state officials caution that the pipeline system must be capable of conducting the operation safely.  In what amounts to shutting the barn door after the horses escaped, the Environmental Protection Agency (EPA) is launching an investigation into the Red Hill fuel facility.  Secretary of Defense, Lloyd Austin ordered the permanent closure of the facility on March 7th.  Hawaii Rent-All’s sign on McCully sums up the mess by announcing, “When gas prices are high, tap into Redhill’s water supply.”  Taxpayers can only hope the investigation does not result in a circular firing squad where one federal agency fines another federal agency and either the taxpayers get holding the bag or the wasted funds further degrade the country’s ability to defend itself. 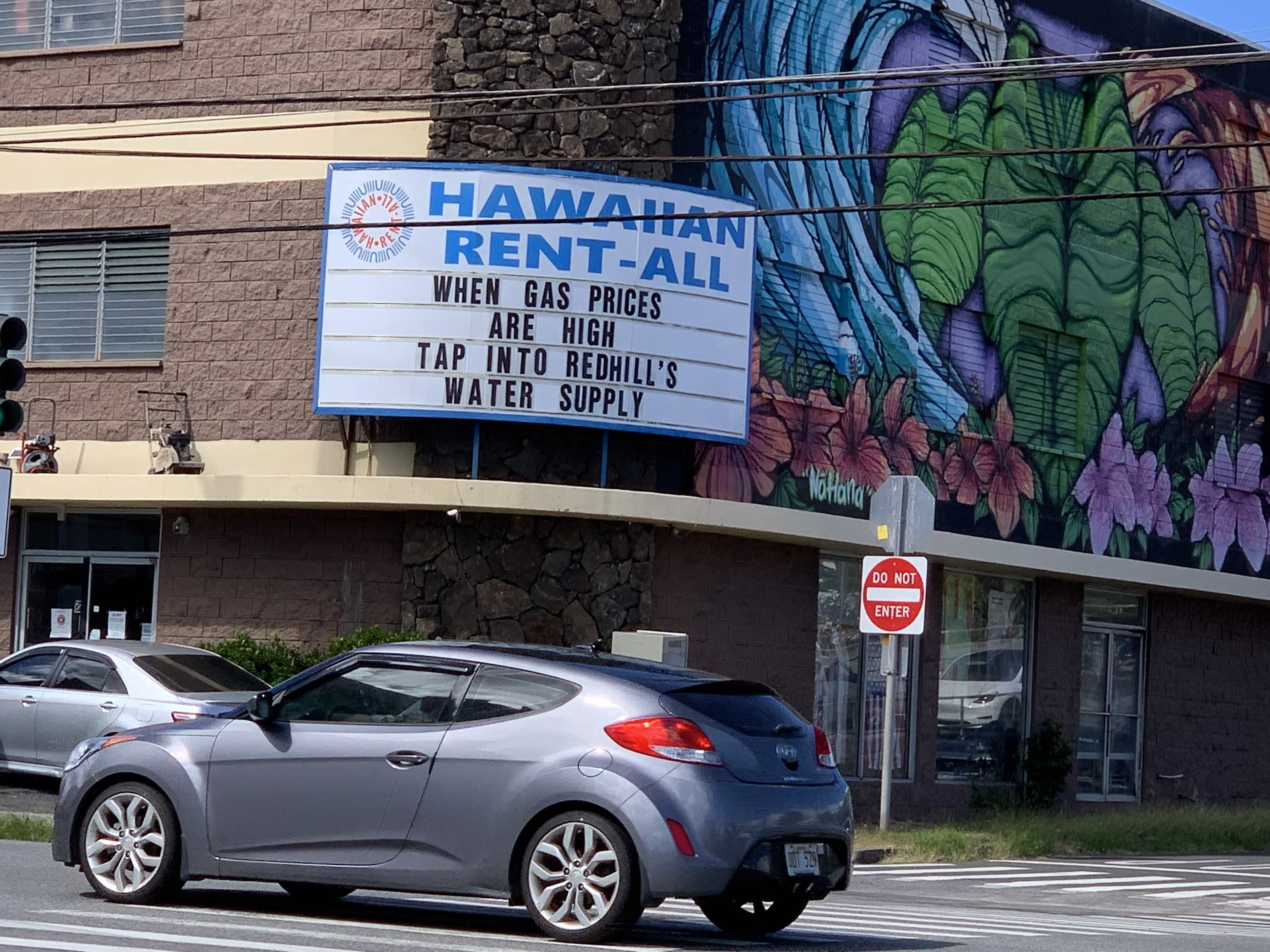 The Federal Bureau of Investigation (FBI) and the U.S. Department of Justice are staying busy in Hawaii.  Prosecutors charged former state Senator Majority Leader J. Kalani English, and state Representative Ty J.K. Cullen and they pled guilty to honest services wire fraud for taking bribes and in return for pushing for legislation considered favorable to, and killing legislation considered unfavorable to, H2O Process, a wastewater treatment and industrial machinery company.  English has retired in early 2021 citing symptoms of long COVID and Cullen resigned 28 minutes prior to the press conference by the U.S. Department of Justice and the FBI.  Milton Choy, owner of H2O Process Systems LLC and Fluid Systems, his son Jarret, two other family members and two business managers donated $268,046 to politicians of the Democrat Party since 2014 including Governor Neil Abercrombie, Governor David Ige, Mayor Kirk Caldwell, and Mayor Rick Blangiardi.  The companies received $6 million in state government contracts for sanitization operations related to COVID-19, wastewater treatment and filtration, and operation of temporary emergency shelters.  Two of the largest contracts totaling $4 million were sole-sourced, meaning that Choy’s companies were the only ones that could meet the bid requirements.  The Honolulu Authority for Rapid Transportation (HART) tried the same tactic when they offered current Chairwoman, Colleen Hanabusa, a lucrative consulting contract with the organization before she turned down the offer after many in the state objected.

The state will have to continue relying on federal prosecutors to investigate state government fraud according to a Civil Beat article.  The state attorney general allegedly created the Complex Litigation Fraud and Compliance unit to investigate cases of corruption, campaign spending fraud, and bribery but has not pursued one case that investigators forwarded to state prosecutors.  Instead, the state has tasked the unit with trying to identify financial backers behind the Thirty Meter Telescope (TMT) protests and protecting the state against lawsuits stemming from Hawaiian beneficiaries who have waited decades for homesteads and often died before receiving a lease.

The Department of Hawaiian Home Lands (DHHL) has once again come under the microscope for failing to execute its mission of developing homes for Native Hawaiian families under the Hawaii Homes Land Trust that was established over one hundred years ago by the federal government and turned over to the state in 1959 when the state of Hawaii was established.  A 2020 Hawaii Supreme Court ruling rebuking the state for mismanaging the land trust and an investigative series of articles by the Honolulu Star Advertiser has shamed the legislature to consider appropriating $600 million to help DHHL provide homesteads to thousands of Native Hawaiians who have been waiting for decades.  DHHL failed to hire independent inspectors to verify builders properly built the homes prior to the Native Hawaiian buyers closing on the properties and moving in.  Dozens of homeowners in two neighborhoods responded to Honolulu Star Advertiser that problems reported during the warranty periods went unaddressed and they had to pay out of pocket to correct the defects. In one extreme case, DHHL stated it did not have authority to help a family that had sewage back up through a shower drain and flooded the downstairs a week after moving in.  The developer eventually reimbursed the homeowners for $50,000 in damages suffered.  Real estate agents have long known that encouraging a buyer to pay for a home inspection can save their client years of frustration and financial pain.  DHHL should have taken the same course of action on behalf of their Native Hawaiian clients.

Honolulu Star Advertiser columnist, David Shapiro, takes HART to task in its latest attempt to resist transparency.  HART, in a brazen attempt to squelch criticism of its operations by board members, has attempted to force legislature appointed members of the board to sign a new confidentiality agreement that calls for criminal penalties for violating the agreement.  Two board members appointed by the legislature have refused to sign the agreements since their responsibilities should include reporting back to the state legislature.  The HART board was preparing to discuss the performance evaluation of new executive director, Lori Kahikina, when the board told the two members they could not attend because they had not signed the agreements.  Critics of Board Chairwoman, Colleen Hanabusa, were not surprised by the developments and attempts to restrict transparency concerning the board’s operation and decision making.  One of the appointed board members is a certified public accountant (CPA) and certified fraud examiner and her refusal is based on concerns that she could not report any wrongdoing that she discovered during her participation on the board to the state legislature.  Her concern appears valid since the project’s costs have ballooned to $11.4 billion and there remains a budget gap of $1.9 billion.

Erosion from North Shore swells claimed a home near Sunset Beach on February 28th as a home’s compromised foundation failed and the house slid down the sand dune to the beach.  Homes on the ocean side of Ke Nui Road have seen their back yards disappear over the decades.  Heavy tarps, sandbags, and boulders from homeowners trying to save their homes from the ocean waves litter the beach by the fallen structure.  The state Department of Land and Natural Resources (DLNR) has allowed “emergency measures” to remain for decades as the state dithers and hopes the problem will solve itself.  The DLNR Chair viewed the wreckage and “hopes that homeowners will take the time to find alternatives.”  Unless the state finds a way to help homeowners move or remove endangered structures, then more houses will end up toppling into the surf. Click the link below to watch a quick report of this event:

The Hawaii legislature is considering bills that would modify the state’s definition of a swimming pool and allow residents to swim in the lagoon developed in the Hookalei neighborhood.  The state shut down the lagoon in 2018 when responding to an unfounded complaint about the lagoon’s water quality when regulators concluded that the statutes consider the lagoon a swimming pool and it must meet the standards of exchanging 100% of the water every six hours.  The lagoon’s water quality is consistently better than some beaches on Oahu due the seaweed covered bottom and from 2.5 million gallons of water seeping into the ocean daily that groundwater replaces.

The University of Hawaii (UH) Rainbow Wahine Basketball Team captured the Big West Regular Season Championship with a win over University of California Santa Barbara on March 5th.  The Wahine finished the season with a 13-3 conference record.  The UH Rainbow Warrior Basketball team finished the regular season with a respectable third place finish at 10-5 in the Big West Conference.  In another positive sign, high school state tournament results filled the sports section as students are once again competing for their schools after sitting on the sidelines for two years.