Here is our 06/10/2016 e-mail update. It is sent after the statistics for the preceding month have been posted on the Board of Realtors website. You can find previous newsletters by visiting www.stott.com/news.

Last month’s median price for single family homes was $719,000 (3.0% higher than May 2015) and for condos was $373,000 (0.5% lower than May 2015). Prices continue to remain near all-time highs as strong demand continues to chase limited supply on Oahu. There is still only 2.9 months of remaining inventory for homes and only 3.1 months of remaining inventory for condos. A strong seller’s market will most likely continue throughout the peak summer selling season.

Hawaii’s economy continues to strengthen, driven by both record tourism numbers and record construction activity. 14,400 non-agriculture jobs were added in the first quarter of 2016 and unemployment dropped to 3.2%. All industries except wholesale trade and state government posted job gains.

Hawaiian Airlines anticipates strong demand for the summer season as it adds 74,000 seats during a 14-week period this summer from the West Coast. Visitor traffic has been rising for both Kauai and the Big Island and Hawaiian will be offering daily, non-stop flights to both islands. While Hawaiian Airlines is trying to ramp up service, their pilots are considering a major disruption. 99% of the pilots have threatened to go on strike if current negotiations fail. The Air Line Pilots Association is asking for a 52% increase in total compensation in the first year of its contract. If either party refuses to mediate further, then a 30-day cooling off period goes into effect before a strike or company lockout can occur.

Hawaii’s failure to adequately upgrade or replace Aloha Stadium has resulted in the latest announcement in a string of sports related snubs. The NFL has announced that it has agreed to play the Pro Bowl in the new Camping World Stadium for the next several years. Maybe the state will finally start acting on replacing the degraded facility with a more modest and modern stadium that better serves the University of Hawaii sports programs.

Hawaii ranked seventh out of 50 states when measuring quality of life for people over age 55. Based on the study, it appears that much of the credit goes to multi-generational families. Multi-generation families continue to be a common way of life on the islands. Hawaii received the highest marks for support for family caregivers and for quality of long-term care and support for seniors. On the downside, senior care costs were fourth highest in the nation. That is not surprising considering Hawaii’s high cost of living.

At the other end of the spectrum, MoneyRates.com rated Hawaii the worst state for making a living for the sixth year in a row. Hawaii’s high cost of living, at 68.6% above the national average, and the state’s tax burden, 3rd highest in the country, are the major contributing factors.

U.S. Rep. Mark Takai, announced that he will not run for re-election due to health issues. The announcement has thrown another monkey-wrench into the Honolulu Authority for Rapid Transportation’s (HART) leadership team as Colleen Hanabusa announced her candidacy for Congress and will step down as chairwoman of HART’s board. In related news, the mayoral race is heating up with three well-known candidates running for re-election. Mayor Kirk Caldwell will face his predecessor Peter Carlisle and former U.S. Rep. Charles Djou. The winner will most likely be the candidate who convinces voters that he can best manage the troubled and over-budget rail project to a logical conclusion.

Hawaiian Electric Company’s (HECO) response to some vocal proponents of increasing roof-top photo-voltaic (PV) system caps would make a classic case study in the social costs of state sponsored monopolies. Hawaii regulators capped the net metering regime for rooftop solar to current customers concluded that customers without PV subsidize the cost of maintaining the grid for customers with PV. Alan Oshima, president and CEO of HECO has several enlightening quotes during a Pacific Business News panel discussion. He describes people without PV as “stranded customers.” He goes on further to state that “everyone in this space has to contribute to a 100 percent future. Let’s change the conversation if we truly are working together. We have to understand that. I don’t think there’s an understanding of that. The clean energy initiative put the onus on the utility to get to 100 percent. We all have the responsibility, not just the electric utility.” Since HECO is the only game in town, Oshima does not need to figure out how to integrate the customer’s choice of power generation, just limit it. He is simply able to tell his critics to toe the line because the state of Hawaii has put the renewable energy burden on HECO’s shoulders. Oahu’s customer base is witnessing first hand how a state sponsored monopolist limits the supply of a popular power generation alternative (PV) to protect their profit margins. Maybe the state should take a look at closer look at separating the electrical distribution business from power generation, open the maintenance of the grid to competitive bidding, and open the power generation market to the most efficient providers (in this case, individual households).

Maui’s broken state-run hospital system will have to wait for help now that the 9th U.S. Circuit Court of Appeals issued an order blocking the July 1 transition of three state owned hospitals to Kaiser Permanente in response to an appeal filed by the United Public Workers, which represents some of the employees. The transition was scheduled for July 1, 2016, and the court order stalls that date until at least September 30, 2016.

Architects Hawaii Ltd. earned the 2016 International Council of Shopping Centers’ Vision-Innovation-Value-Achievement Retails Store Design Award (try saying that five times fast) for its design of the Keeaumoku Street Walgreens store. The award recognizes the world’s most outstanding examples of shopping center design and development. The store beat out a Verizon Destination Store in Minnesota and a shopping center in Quebec.

Preparations have begun in earnest for commemorating the 75th anniversary of Pearl Harbor on December 7, 2016. The official National Pearl Harbor Remembrance Day Commemoration falls on December 7th and a celebration for veterans, active duty personnel, and their families will be held December 8th. The state will hold events from December 2, 2016 through December 11, 2016 in Honolulu and Waikiki. Tim remembers escorting Rear Admiral Fluckey (retired), during the 50th Commemoration. Admiral Fluckey was captain of the submarine, USS Barb, and is credited for sinking the most tonnage of any submarine captain in World War II. The USS Barb sunk 17 ships including a Japanese aircraft carrier, cruiser, and frigate. You can read about him and his crew in Admiral Fluckey’s book, “Thunder Below!” Tim received an autographed copy from Admiral Fluckey and thoroughly enjoyed it.

Navies from 27 countries will arrive to the waters of Hawaii for this year’s Rim of the Pacific drills (RIMPAC). This major naval joint exercise runs once every two years and will involve 45 ships, five submarines, over 200 aircraft, and 25,000 sailors and marines. While most of the exercises will occur in Hawaiian waters, amphibious operations will be held in Southern California.

Visitors trying to see Hanauma Bay are not likely to gain any relief from the long lines plaguing the nature preserve. Demand is likely to grow stronger with Dr. Beach’s #1 ranking this year.

A collection of postage stamps issued when Hawaii was a kingdom and letters from missionaries in the mid-1800’s were auctioned off on May 29, 2016. The proceeds from the auction will be split by the Hawaii foodbank and the postal museum in Washington. The collection includes 10 examples of rare Hawaiian Missionary stamps that were Hawaii’s first postage stamps. The stamps were issued in two-cent, five-cent, and 13-cent denominations and used primarily by missionary settlers from 1851 until 1853 when the Kamehameha III issue was released in 1853. The letters offer a glimpse of what life was like for Pacific Island missionaries in the 1800’s. Hawaii became a U.S. territory in 1898 and the 50th state in 1959.

If you want to get your Geek On, then Honolulu may be the place to do it. DevLeague, Hawaii’s only software development bootcamp, was selected as one of the top 31 bootcamps by SwitchUp, an international coding bootcamp directory. DevLeague received 4.8 stars out of a possible five and the directory noted that the school is highly invested in helping their students find work after they graduate.

Here is some news that will warm the hearts of those that love to sip tropical drinks in paradise. Kauai-based, Koloa Rum Company, won four gold medals at the 2016 Miami Rum Renaissance Festival for its Kauai White Rum, Kauai Gold Rum, Kauai Dark, and Kauai Spice Rum. It won a “Best in Class” gold medal for its Kauai Coffee Rum. Congratulations to Koloa Rum Company and Cheers!

Have you ever wanted a pet donkey? The Humane Society and Big Island residents are rounding up the last 50 of approximately 500 wild donkeys that have been living off the land (golf courses, residents’ yards, etc.) since being released from Hawaii coffee and agricultural plantations decades ago. The feral donkey herd went unmanaged for about 40 years when drought conditions forced the donkeys into residential areas in search of water. The animals wandered on roads, tore up golf courses, and drank from swimming pools. The Humane Society has found adoptive homes for about 450 of the animals and about 40 of the remaining 50 have already been spoken for. The donkeys must be adopted in pairs or have another animal to keep them company because they are very social animals and need a friend. Doesn’t everybody need a friend?

Planning a trip to Oahu during the holidays? Ever ice-skated outside in paradise? The Howard Hughes Corp, developer of Ward Village in Kakaako, is planning on bringing back the 4,200 square foot ice skating rink after a successful debut last year. The rink opened on Black Friday and closed after the holidays in January. During the first go-around, more than 16,000 people rented skates. 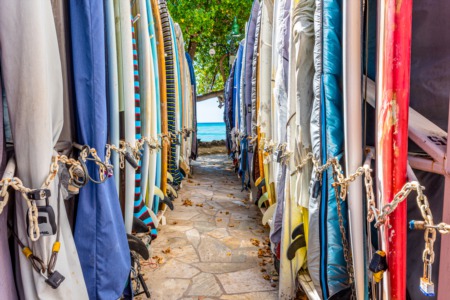