Here is our 01/10/2020 e-mail update. The newsletter is sent after the statistics for the preceding month have been posted on the Board of Realtors website. You can find previous newsletters by visiting www.stott.com/news.

The University of Hawaii Economic Research Organization (UHERO) predicts that Hawaii’s economy will eek out a small gain despite falling real visitor spending and a declining population. Visitor arrivals are expected to grow again next year but per visitor spending is expected to drop again due to global economic weakness. Payroll job growth dropped to zero last year due to outward migration and real personal income is expected to lag Honolulu’s inflation rate over the next three years. Hawaii’s labor force has dropped by about 25,000 individuals since 2017 and Hawaii lost 4,721 residents from July 2018 to July 2019.

A recent study by the Department of Defense (DOD) has found that rental prices have fallen about 3% in the past few years on Oahu while calculating the military’s Basic Allowance for Housing. The study reinforces a recent report by Zumper documenting that one- and two-bedroom apartment rents have dropped in Honolulu over the past year. A declining population and lagging payroll growth will likely put more downward pressure on rents in 2020.

The State of Hawaii sent out a notice regarding mandatory electronic filing of taxes in 2020 including the General Excise Tax. Department of Taxation Announcement No. 2019-16 states that periodic general excise tax returns (form G-45) for months beginning on or after July, 1 2020 must be filed electronically and that annual returns (form G-49) for taxable years beginning on or after January 1, 2020 must be filed electronically. Electronic filing is available on Hawaii Tax Online https://hitax.hawaii.gov.

The state continues to struggle with ongoing erosion on Oahu’s Windward Coast where Kamehameha Highway winds along the coastline. The earth below a 270-foot section of the roads Makai shoulder (ocean side) in Hauula has eroded and the shoulder has collapsed because the beach sits below the road by about six feet and the area beneath the shoulder is exposed to high surf. The Hawaii Department of Transportation (DOT) will conduct emergency repairs that involve shoring up the area with a barrier made of boulders and loose fill held in place by cement. The barrier is designed to dissipate the wave action on impact and minimize wrap around erosion in nearby areas. DOT conducted emergency repairs on another stretch of the Kamehameha Highway last April.

State bureaucracies continue to resist the state legislature’s attempts to provide increased transparency and accountability by redacting information from reports to either state auditors or elected state officials. The most recent incidents involve the Office of Hawaiian Affairs (OHA) and the state prison system. The Honolulu Star-Advertiser has consistently reported on OHA’s failure to fulfill its mission to the Native Hawaiian population and alleged corruption by OHA Board Members. The state auditor recently announced that it is suspending the audit ordered of OHA limited liability corporations (LLCs) during the state Legislature in 2019 to report findings and recommendations prior to the 2020 legislative session. OHA is claiming that redacted minutes of its board meetings are protected by attorney-client privilege. Prison officials have been submitting reports to the governor under a state law passed last year requiring the disclosure of cases where a prisoner has died in custody of the state’s prison system. Prison officials have heavily redacted information in reports released to the Honolulu Star-Advertiser including the names, ages, and gender of inmates and some reports failed to list a tentative cause of death. A report filed with the governor on December 26th describes the death of an inmate on Christmas day initially classified as a homicide from an inmate on inmate assault that occurred in November.

Mayor Kirk Caldwell signed the bill that creates a new property tax classification for Oahu residential properties that run bed and breakfast businesses (B&Bs) and places transient vacation units (TVUs), residents that are entirely rented out on a short-term basis, into the hotel-resort category. Vacation rental units permitted before 1989 are exempt from the new law and will continue to pay the residential property rate.

Tension concerning the Thirty Meter Telescope (TMT) protests boiled over on the Big Island as the Hawaii County Council rejected the agreement that mayor Harry Kim reached with the state concerning reimbursement for police overtime during the protests in a 9-0 vote. The council members sent the mayor a message that he must consult with them before entering into an agreement with the state. The council members were opposed to the deal because it required county police to respond to Mauna Kea protests for five more years. The state and county has spent about $15 million during the 22 weeks of non-violent protests. Hawaii County has spend about $4.7 million in police overtime alone.

The TMT protestors cleared from Mauna Kea Access Road on December 28th, two days after Governor David Ige’s deadline to clear the road or face arrest. The protestors agreed to move once they received word that TMT would not try to proceed with construction over the next two months. TMT opponents are still determined that the telescope will never be built on the summit of Mauna Kea. To that end, the protestors plan on shifting the focus of the protest to people on the mainland. TMT supporters gathered outside the Hawaii Convention Center on January 5th to show support for the project during the 235th meeting of the American Astronomical Society consisting of more than 3,400 astronomers, professors, and students.

The Kauai Island Utility Cooperative (KIUC) has recently provided electricity using 100% renewable energy for several hours per day over eleven days. KIUC’s renewable portfolio includes utility scale solar, one biomass plant and several hydrogeneration facilities. A Tesla solar facility allows solar fields to simultaneously feed the grid and charge batteries during the middle of the day and then the batteries can provide power after sunset. The next renewable sources to come on-line are another solar facility with industrial batteries at the end of 2020 and a solar project with an integrated pump hydro storage system that is under development and is expected to come on line in 2023 or 2024.

Hawaiian franchise Zippy’s Restaurants recently signed a contract to serve Pearl City’s Dave’s Ice Cream in its 24 restaurants after Meadow Gold Dairies informed Dave’s that it would supply restaurants including Zippy’s with its own ice cream made in Utah as Meadow Gold’s parent, Dean Foods, tries to shed debt while going through bankruptcy. The contract prevents the decision by Dean Foods from crippling Dave’s Ice Cream, Inc. since Meadow Gold was Dave’s biggest customer. Dave’s is actively seeking other contracts with local businesses to shore up sales.

Sensei Farms, a hydroponic farm on Lanai funded and developed by Oracle founder Larry Ellison, who owns 98% of Lanai, aims to bring affordable agriculture back to Hawaii. The farm currently consists of two temperature regulated greenhouses that house the plants and keep out pests with initial plans to expand the farm to nine greenhouses. Hydroponics farming uses 10% of water needed to field farm vegetables and Lanai has a low supply of water. While the greenhouses don’t use sophisticated temperature control systems, computers control watering and nutrients to the plants. The farm plans to supply the island of Lanai with fresh produce from one or two of the greenhouses which leaves the remaining seven or eight to supply the consumers on the other islands. The goal of the venture is to produce fresh vegetables at or below imported prices in Hawaii’s high cost environment.

The #18 University of Hawaii (UH) Rainbow Wahine’s volleyball season came to an end in a losing effort to #5 Nebraska Corn Huskers in straight sets during the third round of the NCAA tournament. UH was leading in the first set 17-10 but could not hold off Nebraska who came back to win 29-27, 25-22, 25-19. The Rainbow Wahine finished a fabulous season at 26-4, won their first Big West title in coach Robyn Ah Mow’s third season, and returned to the third round of the NCAA tournament for the first time since 2016. UH has high hopes for the future with five freshmen returning.

The UH Rainbow Warrior football season came to a thrilling conclusion with a last minute comeback victory over Brigham Young University in the Hawaii Bowl. Cole Hamilton threw a 24-yard touchdown pass with a little over one minute remaining to put UH on top, 38-34. The Rainbow Warriors finished the season 10-5.

The Honolulu Star Advertiser reported on the unique ceremony for interring the ashes of Lauren Bruner, most likely the last USS Arizona survivor to join the rest of his shipmates in gun turret 44. Two Army divers wore vintage Mark 5 hardhats, lead boots, and dry suits that weighed about 200 pounds to deliver Bruner’s ashes to his final resting spot. More than 900 sailors remain entombed on the USS Arizona from when a huge explosion sank the battleship 78 years ago. The US Navy from 1916 to the early 1980’s used the Mark 5 Dive Rig. Here is a link to a video of the event.

Hawaii’s state bird, the nene, has been removed from the endangered species list. The nene currently number about 2,800 in the wild. The birds have gradually recovered when roughly thirty wild nene existed in the 1960’s. Over the following decades, more than 3,000 captive birds have been released at more than twenty sites including wildlife refuges, national and state parks, and private land throughout the state. Nene geese were first observed back on Oahu in January 2014. The nene is still a threatened species and scientists will continue to monitor their recovery.

The Hawaiian Hawk, or ‘io, has also been removed from the endangered or threatened species list since the hawk’s population has remained stable for more than 30 years and is no longer at risk for extinction. The ‘io is the only native hawk to Hawaii and only breeds on the Big Island.

Tim and Tracey recently returned from an action-packed three-day trip to New York City celebrating Ashley’s (their daughter) graduation from Duke University. Tim, Tracey, Ashley, Mark and friend David visited the Empire State Building, the 9/11 Memorial, the Jewish Heritage Museum, went up to the crown of the Statue of Liberty, and saw the Rockettes, Wicked, and Hamilton. Tracey met a newsletter recipient that works in theatre during an open house this year who graciously arranged back-stage passes to Radio City Music Hall (the Rockettes) and Hamilton when she heard that we were on our way to her city. We were so grateful for the incredible experience. Below is the Kelley Family in the crown. 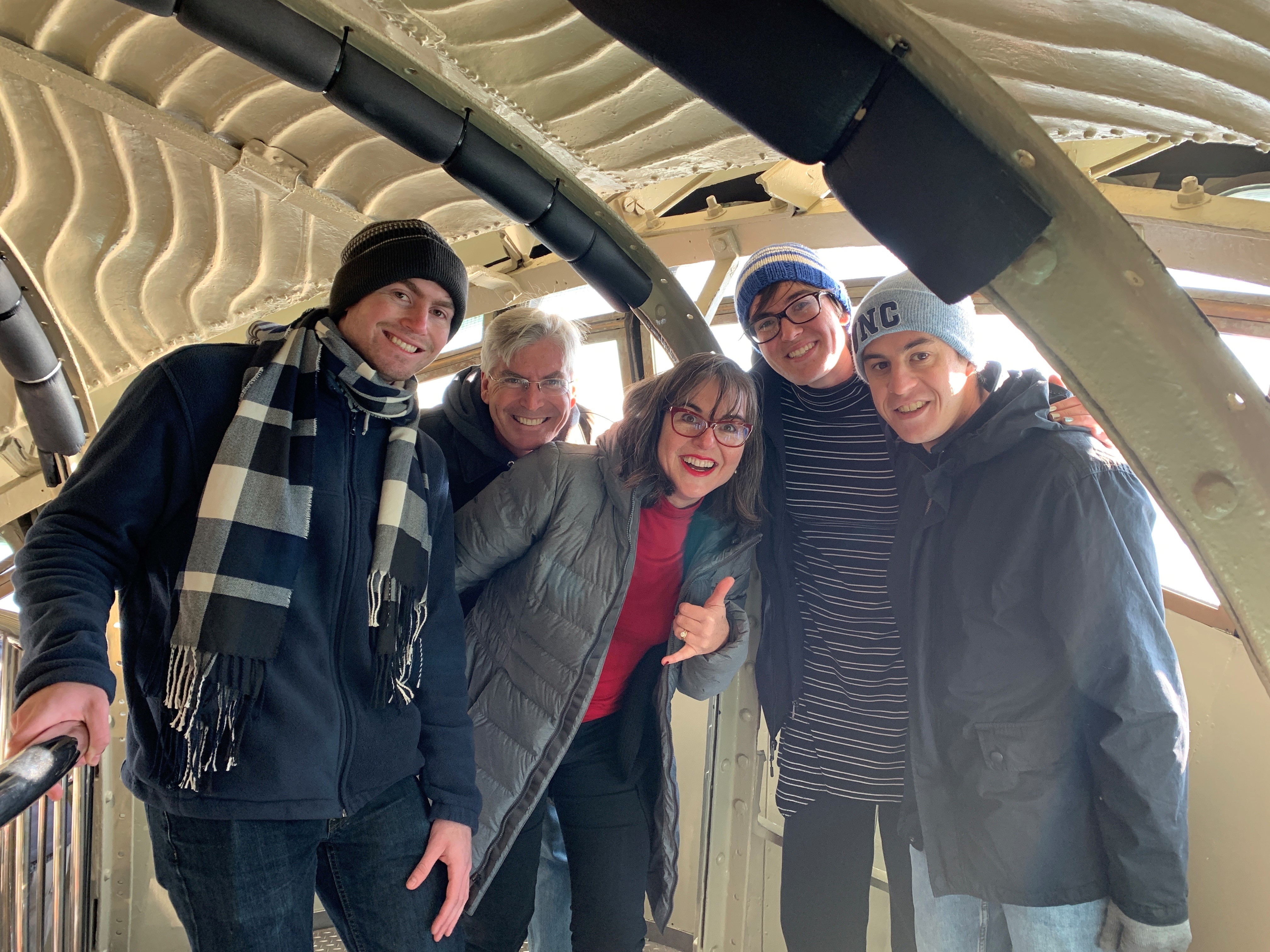 If you have suggestions for our newsletter, please e-mail us at [email protected]

November median sales prices for both single-family homes and condos matched records as supply constraints get worse.  The median price of ...Read More